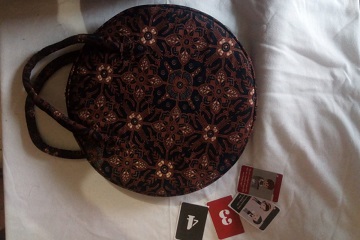 A child's world is always correlated with games. Currently, children like to play games in their computer or gadgets and to watch videos and television shows all day long. The impact of those activities is that the children would be less socializing with their surroundings and be more reluctant to do physical activities to explore nature.

If parents don't wisely regulate those technology-based activities, and do not provide a more stimulating activities, there is a concern that the children's development would be lacking in some way. Even worse, moral deviation can also happen to the children due to lack of monitoring in using gadgets. Because of that reason, various alternative toys have to be available for the children. The preferred alternative is the one who can develop the child's cognitive, motoric, and social capabilities, as well as his/her character.

Currently most of children's toys are imported from China, reaching 95% of the total toys available in market. However, there is no assurance that those toys are safe for the children, since most of those imported toys are not Indonesian National Standard (SNI)-certified. Moreover, many products only serve as an entertainment and don't give any educational benefit for the children.

There are many aspects in children that can be developed and stimulated through toys and games. Children's toys that can educate them are usually called Educative Toys (APE). This kind of toys are still rarely found and the price is usually high.

Coming from that issue, a group of students from Bogor Agricultural University (IPB) creates an APE based on character building. Through Students Creativity Program in Entrepreneurship (PKM-K) 2018, students from Faculty of Human Ecology, Mira Rahmawati, Dwilzhaty Afriandani, Naila Aliya Marhama, Silvi Kurnia Septiani, and a student from Faculty of Veterinary Medicine, Alwi Hadad, built a creative business by inventing "Lingkaran Karakter (Liker)". Liker is an attempt to stimulate children's moral capacity since their early ages by utilizing patchwork as the main material.

"We are very concerned with children's moral these days that is starting to be degraded by globalization. Because of that, we choose character building as an alternative that has to be developed," said Mira, the team leader.

However, current character building is still focused on schools and hasn't reached the society as a whole. Because of that, Mira and team created this accompanying media for parents or character building-based APE for children, especially for children under school age and elementary school children. To make production cost more efficient, the team uses reused materials by utilizing patchwork as one of the materials.

APE created by Mira and team is circular in shape and complemented by other tools, which are cards, puzzle, and emoticon board which are packaged in one portable and efficient pocket.

"Inside the pocket there is a set of Liker toy, which consists of the circular board, start card, reward cards, star-shaped cards and puzzle," explain Mira.Liker by IPB students is created to stimulate children's moral capacity, which consists of three aspects; moral knowing, moral feeling, and moral acting. (Ard)