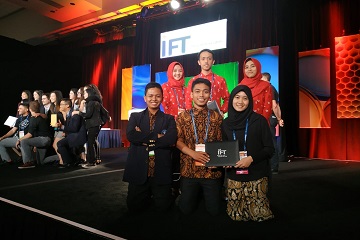 Student delegations from Bogor Agricultural University (IPB) triumphed at Developing Solutions for Developing Countries (DSDC) competition held by the Institute of Food Technology Student Association (IFTSA) on July 15th-18th, 2018 in Chicago, USA. ‘Regali’ team, consisting of three students from the Department of Food Science and Technology, Faculty of Agricultural Technology, won the Runner Up with honorable mention for their innovative idea on creating alternative food for Kenya as a drought-threatened country. The idea of ‘Regali’ team was derived from Kenyan corn-based porridge namely ‘ugali’. Corn is relatively drought sensitive, thus the team developed similar product using sorghum, a more drought-tolerant crop. Besides, sorghum is also packed with nutritious property that can also overcome Kenyan health obstacles. Moreover, another added-value of the product was ready-to-serve packaging feature. Therefore, ‘Regali’, the team’s name, stands for Ready to Eat Ugali.

This victory proved that IPB has continued the championship tradition that has been going on in previous years. The DSDC competition was one of the IFT EXPO 2018 activities held for undergraduate and postgraduate students from all over the World. The IFT is an international professional organization located in the United States of America, consisting of food science and technology practitioners, entrepreneurs, and governments. The DSDC competition encourages students to apply food science and technology through the development of decent products that are economically feasible at the industrial scale.