A Group of Researchers of IPB Analysed the Fermented of Azolla sp. as a Fish Feed Ingredient for Tilapia Oreochromis sp. 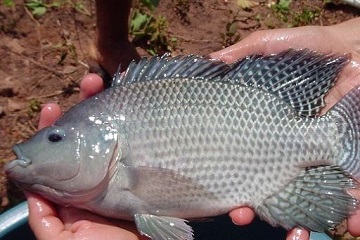 Feeding of fish during culture aims at producing the maximum weight of marketable fish within the shortest time at least cost. The feed should supply the energy for movement and all other activities the fish engages in. It should also provide nutrients for body maintenance, growth and reproduction. Feeding increases fish growth and makes fish farming profitable. Feeds must be nutritious and economical in any farming system and must be properly managed to be effective. Artificial feed is an important factor in fish farming, as 40-60% of variable production costs in a normal production cycle is due to feed. The major obstacle to produce the feed is the availability of raw materials, some of which are still imported. Azolla or Daun Mata Lele in Indonesian is a native water plant with some seriously exciting attributes for anyone looking to develop closed-loop cycles for organic animal feed. Azolla sp., is small aquatic plant/fern which grows in abundance throughout the lower reaches of the Broken Creek system. Azolla is actually suitable for any animal that eats vegetation, and fish and yes, obviously, ducks. It is potentially used as a raw material for herbal pellets and it has key nutritional value (10-25 percent protein, 10-15 percent minerals, and 7-10 percent amino acid).

Accordingly, a group of researchers from the Department of Aquaculture, of the Faculty of Fisheries and Marine Sciences, of Bogor Agricultural University (FPIK IPB), Nur Bambang Priyo Utomo, Nurfadhilah and Julie Ekasari, carried out the research program to analyse the effect of incubation period on the nutritional content of Azolla sp. fish feed  fermented by Trichoderma harzianum, and its optimum supplementation level in the feed of tilapia Oreochromis sp.

In this experiment, this researcher uses Oreochromis sp. with an average weight of 10.59 grams. Tilapia fish stocked in 50 × 45 × 30 aquarium size with density of 6 fishes per aquarium. The design of the feeding treatments was repeletting commercial feed with Azolla leaves by with different supplementation levels, i.e. 0% (A/control), 30% (B), 60% (C), and 90% (D). Faecal collection for digestibility measurement was conducted for 15 days and fish

growth rate was observed for 40 days.

"Differences in the feed intake, palatability and protein digestibility between control treatment and treatment of Azolla leaves by 30 percent less than 5 percent, showed that fermented Azolla leaves supplementation as much as 30 percent did not affect fish appetite and protein digestibility, thus, it was the optimum level of supplementation, "he said. (Wied)

Keyword : A Group of Researchers of IPB Analysed the Fermented of Azolla sp. as a Fish Feed Ingredient for Tilapia Oreochromis sp.