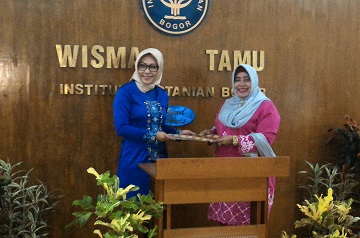 Chairman Agrianita IPB period 2012-2017, Enny Rohaeni Herry Suhardiyanto, in her remarks reported that  the Management of Agrianita has established various work programs that were well-implemented. "Let us improve and develop our Women Organization “Agrianita” that could address, with a united voice, issues of common concern to improve the dignity and prestige of women," she said.

Enny Herry Suhardiyanto also expressed her gratitude for the cooperation and support given during her chairmanship, she requested the audiences and the university to accept her sincere apologies for the inconvenience they may have experienced due to the mismanagement in her term.

I hope all newly appointed the board chairman and members are able to lead the organization in continued pursuit of its vision and mission, and its planned annual work programs. It is well-understood that  Agrianita of Bogor Agricultural University has planned its work programs in such away to enable to this women organization of IPB to be useful not only for its members, but also the general  public. Especially its vision to build the campus and its environment a place where every woman, man, and child leads a healthy, fulfilling life of self-reliance and dignity, so gender equality can be achieved," she added.

Meanwhile, the newly appointed chairman of the Agrianita period 2017-2022, Retna Widayawati Arif Satria, expressed her gratitude to the board chairman and members period 2012-2017 who has developed and managed Agrianita well. "Hopefully we can spend time, energy,  and mind together in developing our beloved  organization," she said. (Wied)

Keyword : Agrianita of IPB Organized Handed-over of Its Management to the Newly Appointed Chairman period 2017-2022