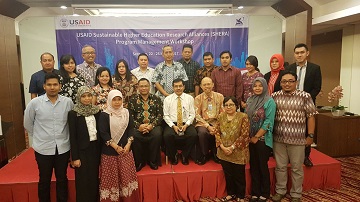 The Rector of IPB, Prof.Dr. Herry Suhardiyanto, had appointed Prof.Dr. Bambang Purwantara as the Director and Dr. Alan F. Koropitan as the Deputy Director of SHERA in IPB with the umbrella of “Interdiciplinary Graduate Education and Research in Animal Biotechnology and Coral Reef Fisheries” program.

Prof. Bambang said, this program was the USA government grant through USAID coordinated by Kemenristekdikti with the aim to strengthen the academic and research capacities in the university. Through USAID SHERA, it was expected to increase the human resource capacity, the research and development (R & D) in the university, and the improvement of the quality of research. It was expected to boost the increase in the number and the quality of the international publication, and the increase of the conducive environment for the implementation of the quality research.

Prof. Bambang explained, initially there were 67 proposals from the state universities (PTN) to cooperate with the universities in USA. A total of 48 of them passed the administrative selection. However, then it was selected 17 best proposals, and they were selected into 13 proposals. Furthermore, it was selected 5 proposals. From the result of the final evaluation, of 5 areas of focus, IPB was trusted to manage the area of focus of the Food Security and Self Sufficiency. The topic proposed was the amalgamation between the group of cattle (cow) proposed by the Faculty of Veterinary Medicine (FKH) of IPB, and the coral reef fisheries by the Faculty of Fisheries and Marine Science (FPIK) of IPB.

Besides that, some of the partners which would be associated with the implementation of the results of the study, such as the Center for Artificial Insemination, Singosari; the Center for Artificial Insemination, Lembang; and the Center for Animal Embryo, Cipelang, were the strategic partners for the development of the cattle quality. “A number of the local governments, NGOs, and the private sectors which are the stakeholders of the potential development of the coral reef fisheries will be heavily involved in this program,” he said.

“The hope is, the cooperation and the partnership can be realized in order to promote the national food self-sufficiency from the sources of livestock, fisheries and marine well. CCR which will be established and built can be the center of excellence for the animal food supply in Indonesia. This USAID SHERA program will have a term of almost four years, starting to be effective from April 2017 and ending in December 2020,” he concluded. (Awl)