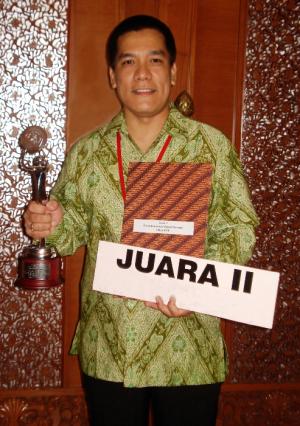 A lecturer of the Department of Community Nutrition, Faculty of Human Ecology, Bogor Agricultural University Drh. Rizal Damanik, MRepSc, PhD, received the second best award for National Achieving Lecturers in 2010 from the Ministry of National Education, for his research on the benefits of torbangun leaf (Coleus amboinicus Lour) to improve the quality of breast milk.

The research background is the high percentage of malnutrition problems in this country. In the health sector of development, particularly the health of mothers and children, the impact of this economic crisis is significantly noticeable. Various studies have reported many breastfeeding mothers are unable to meet the nutritional needs required for them and of course also for the newborn babies.

Adequate breast milk is not only obtained by fulfilling nutritional needs during lactation, but can also be facilitated by consuming food / ingredients as laktagogum (to stimulate milk production). So as a child of the nation who comes from the ethnic group of Batak Simalungun, Dr. Rizal Damanik conducted a research on the use of Torbangun vegetable among breastfeeding Batak women. Batak people in North Sumatra Province have the tradition of consuming Torbangun and believe in the efficacy of the vegetable as laktagogum (stimulant of milk production). It is unfortunate that Torbangun is a wild plant, and so its potential efficacy has not received adequate attention from the scientists.

The research on the use of Torbangun leaf was conducted in Tano Batak in the Regency of Simalungun by involving the local people as participants in the study. In order for the result of this study can be taken to an international forum, during the intervention of the study, the laktagogum efficacy of Torbangun vegetable was compared to Fenugreek tablets and capsules Moloco + B12, each of which is commonly used as laktagogum by lactating women in Europe, America and major cities in Indonesia. The results showed that the breast milk of mothers who consumed Torbangun was the best and has been scientifically proven. The research result certainly has a positive effect especially on the health of mothers and children, who could not meet the nutritional requirements for breastfeeding mothers.

Research conducted by Dr. Rizal Damanik is the first comprehensive study on Torbangun vegetable in Indonesia that has raised and exposed the local tradition of Batak society to various international forums. For the achievement Local Government of Simalungun Regency and its House of Representatives Council has granted Dr. Rizal Damanik as an Honorary Citizen of Simalungun.


Drh. Rizal Damanik, MRepSc, PhD, the second of four children, is the son of the late H. Alexius Damanik, SH and Hj. Nur Ahat Sinaga and completed his bachelor degree in veterinary medicines at the Faculty of Veterinary Medicines, IPB Bogor. He then received AIDAB Scholarship of Australian Government to take a Master degree (Master of Reproductive Sciences) at the Faculty of Medicine Monash University, Melbourne Australia in 1991. After finishing his Master program he returned to IPB as a lecturer at the Department of Community Nutrition and Family Resources, Faculty of Agriculture IPB. In 2001, he again obtained a scholarship from the Australian Government (AusAID) to take a doctoral program at the Faculty of Medicine, Monash University. In the doctoral program at Monash University, he managed to get 2 (two) awards associated with the materials of the research on Torbangun namely (1) John Ledge Prize for Research Excellence and (2) Mollie Holman Medal for Best Dissertation. Another acknowledgement is that his appointment as an Honorary Research Fellow at the Asia Pacific Health & Nutrition Centre, Monash Asia Institute, Monash University. In addition, in 2006 until 2009 he was involved in conducting research about Torbangun in the Department of Nutrition Sciences, Faculty of Allied Health Sciences, International Islamic University Malaysia, as Visiting Assistant Professor.

From the results of this research on Torbangun several scientific articles have been written and published in various international scientific journals (such as the Journal of Human Lactation, Annals Nutrition & Metabolism, Asia Pacific Journal of Clinical Nutrition, Malaysian Journal of Medical Sciences), a number of paper presented in international conferences in various countries such as Australia, Canada, China, Malaysia, and Thailand, and interviews in the electronic (TVRI & Radio ABC Australia) and printed media (magazines and newspapers), and educational programs in villages to inform the importance of breastfeeding in the nutritional requirement for newborns. In the field of scientific publication, in 2008 Indonesia Danone Institute has granted Dr. Damanik "Publication Award 2008".

In addition to his duties as a lecturer and Chairman of Graduate Programs, Department of Community Nutrition, Faculty of Human Ecology, IPB, Dr. Rizal Damanik has until now continued to carry out further research and collaborate to improve other dosage forms to facilitate breast-feeding mothers to consume the leaves of Torbangun so that the nutritional requirement of breastfeeding mothers and infants can be optimally achieved through a sufficient supply of high-quality breast milk. He also plays an active role as a reviewer of both the Indonesian Danone Institute and the Directorate of Research and Community Services at the Ministry of Higher Education as well as various international scientific journals such as the Asian Journal of Clinical Nutrition, Research Journal of Phytochemistry and the Journal of Medicinal Plant Research.(mtd)