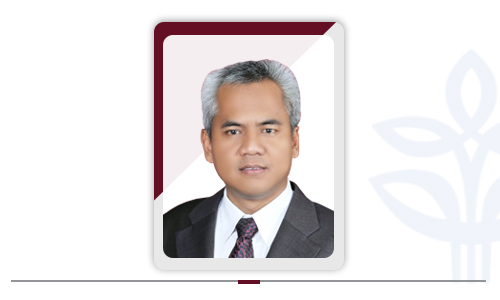 His intelligent thoughts related to macroeconomic conditions both nationally and globally, as well as financial aspects and international economic relations made Prof. Azam known as an expert in the field of International Monetary Arrangement. Not only that, he is also known as an econometrics expert, a scientific discipline that addresses the problem of measuring economic relations that includes economic theory, mathematics, and statistics in a unified whole system, into a science that is independent and different from economics; mathematics; and statistics.

In relation to agriculture, he said that agriculture is the sector that has the lowest prosperity compared to the mining sector, which on average gain of 20 times prosperity compared to workers in the agricultural sector. According to him, this data shows that economic transformation is not followed by labor transformation, so the agricultural sector carries a very heavy burden. In addition, the agricultural sector is the largest container for low-educated human resources. This is inversely proportional to the financial, service and energy industries that are filled with human resources with high innovation power. The national economy after the 1997 crisis was burdened with debt problems, both foreign debt and huge domestic debt. The Indonesian economy is vulnerable to external disruptions, including capital inflows in large quantities and the amount of exports and imports.

He argues, investment assistance and technical support is needed from more developed countries to relatively underdeveloped countries. For this reason, the political economy of alignments is a must. This is not free; Indonesia cannot expect the kindness of other countries but must struggle through negotiations both bilaterally and multilaterally.