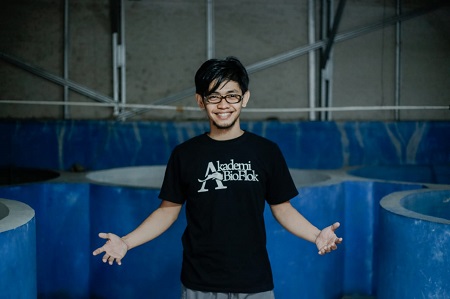 Teguh Gumilang, alumnus of IPB University’s Department of Mechanical and Biosystem Engineering, Faculty of Agricultural Engineering and Technology, has successfully established the Gumilang Farm with an iconic Biofloc Academy. Biofloc Academy is a learning platform about fish farming using the biofloc technique. The Biofloc Academy has trained communities and both domestic and foreign corporations.

The background of this establishment came from the thought that agriculture is immortal. Teguh Gumilang started his entrepreneurship in 2008 while still undergoing his studies. At that time, he had started a small-scale fishery near the IPB University Dramaga Campus. After a period of time away from his business, he decided to refocus towards this entrepreneur path in 2014 when he restarted his business with the name Gumilang Farm.

Teguh explained that no matter how long, as long as people are still in need for food, agriculture will always be needed, and the market will continue to be exist.

Gumilang Farm is a business entity with interests in urban farming. It has several core businesses including a training and consultation service and processing of agricultural products under the organizations Hasil Tani Indonesia and Sayur Indonesia. Teguh had also mentioned that businesses are risk management where loss and failure is included. He explained that there are many who are not aware about this and only sees the success. Behind that success are hardships and tears which are kept internally. Teguh mentioned that their harvest had once been stolen, costing them 60 million IDR. To overcome this problem, they had to trace down the roots of the problem and then resolved it. He confessed that the incident had not made him back down. In fact, he has great ambition for the public to independently cultivate their own food.

He expressed his hopes for people to know what they are eating by cultivating their own food and being in control of what they are actually consuming by owning a biofloc unit and a hydroponic installation. Families are the main pillars of food security. Gumilang Farm wishes to start from the smallest scale, which is one family unit, so that they could be independent in terms of food. Teguh also holds on to the principal that all products being launched and campaigned by his business are halal and toyyib.

This is done by making sure that the food they produce does not go against religious and social norms. For example, in fish farming, they strictly control the feed used, feed from carcasses or excretion are strictly prohibited. To close his statement, Teguh relayed a message for students and new fresh graduates of IPB University. His message was for students to have a strong mentality and not be dependent because the real world will only begin once university ends. He also added for students to not be afraid of starting out, to star with clear intentions and prayer. He closed his message by saying that results do not betray efforts.