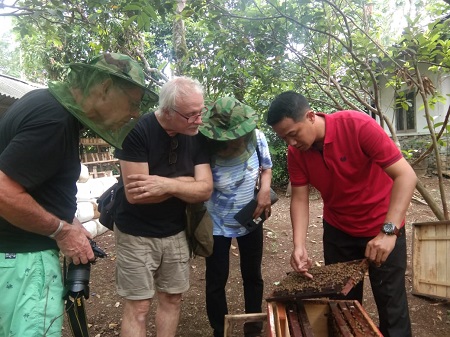 Eureka Indra Zatnika, an IPB University alumnus from the Animal Production Technology study program, Faculty of Animal Sciences saw the potential of raising honeybees in Indonesia. He founded Madu Pak Lebah, to raise Honey Bees and is currently a Small to Medium Sized Enterprise (UKM) with the help of Incubie from the Institute of Research and Community Service (LPPM) IPB University. Madu Pak Lebah farms is located in Semplak Bojong. This farm is able to produce quality honey that has been sold all around Indonesia.

Eureka started his business in 2013. But before that in 2006, he already started to learn about bees from his old workplace. “In 2008, at the start I was trained in the beekeeping arts. There were many that joined and later on I was inspired to turn into my own business, which was realized in 2013,” said Eureka.

Madu Pak Lebah farms produce superior quality honey from the nectars sucked by the Apis mellifera, Tetragronula, Apis dorsata bees. The Apis mellifera honey bee is considered one of the best honey producers around. Aside from creating large amounts of honey, this species of bee is also relatively tame and easy to keep.

Apis melliferas are characterized by their physical features different from other bees, such as the three segments in the back of their abdomens where they are yellow and their wingspan is in the 0,8-0,95 cm range. Next is the Tetragronula, this bee is spread all over Indonesia from Sabang to Merauke.

“Starting a business, you need motivation, hard work, and seriousness to be successful. Start your business with something you have interest and have skills in. With the knowledge you have, don’t forget to always be continuously focused and serious. Don’t give up so easily, that’s the key to a thriving business,” he adds.

In his interview, Eureka has five principles he abides to when running his Madu Pak Lebah business. First to start a business with knowledge and calculations, joining a business not only because you’re going along with what other people are doing. Being honest in convincing consumers that the product you’re offering has high quality, be ready with failure and be patient.

“You can start a business just to try, but to be successful you need knowledge and calculations, then you need to convince yourself and be honest. Don’t just go along with trends when starting a business, evaluate if it’s truly compatible with who you are. When we fail, we need to be ready for it, and have the patience to deal with it. The biggest challenge for millennials is they have the drive to be successful, but they fear failure,” said Eureka.

Starting only from conventions, Madu Pak Lebah has now grown into a promising business. Madu Pak Lebah resellers are spread all over Indonesia. Other than that, the business has worked together with the government to hold beekeeping training in various parts of Indonesia. (SMH/Zul)