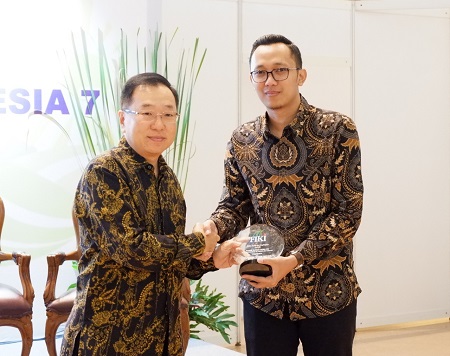 CEO of PT. Pandawa Agri Kukuh Indonesia, Roxa Putra Hadriyono, an alumnus from Agronomy and Horticulture IPB University found PT. Pandawa Agri Kukuh Indonesia since 2014. Kukuh has acquired many achievements such as Asia Innovator by DBS Foundation ASIA 2017, 9 Best Innovator in The World by Smallholders Advancing with Innovation and Technology (SAWIT) on 2016, Mandiri Young Technopreneur by Bank Mandiri on 2013, and winner of Social Entrepreneur Based on Social Impact and Environment by Sampoerna Foundation & INOTEK on 2016.

Kukuh said we need integrity and sincerity to be a young entrepreneur. “First is integrity. This one can’t be tolerated, it’s because integrity is a key for people to count on us.”

He believes that IPB University has taught him many things, specially a foundation to develop Agrichemical Business.

“IPB taught me lot about cooperating with students from different background. It’s really important to teach us about integrity and how to face others, it’s useful in adulthood. Even when you’re not serious about agriculture, there will be changes in way you think and communicate with others.

Kukuh built this company not only for business sector, he wants this company to be useful for environment. PT. Pandawa Agri Indonesia (PAI) is a company he built with his team to produce agrichemical reductant.

Agrichemical reductant believed they cas reduce up to 50 percent pesticide from usual it’s dose. It can be used by farmers safely and minimalizing pollution created by regular pesticide.

“There’s a lot of risk if we use pesticide massively, it will harm the environment and pest will be more adaptive with pesticide. After developing this product, we believe that we already reducing a million liters  pesticide usage.”

On first, Kukuh and his team canvasing business that runs in pesticide development but after they realize almost 100 percent material used to create pesticide import from other nation, they want to produce something new made from local materials. “We sure that there’s plenty of local resources that we can use to develop this product”.

Kukun believed that moment was a lesson for him to always create something new and optimizing Indonesian biodiversity.

“If you can study on IPB University, it will be best for you to develop this nation, it won’t be something big if you always dream about yourself. Personal needs are basic to develop yourself, but don’t just stop on that, it will be better if we ask about our participation to develop our nation.”

If you want to be useful, you can do it on many ways, not only entrepreneurship or agriculture sector. “Don’t judge something by it’s price, take some sample like they who dedicating their life to educate the poor, it’s more noble that doing nothing” said Kukuh. (SMH/RA)