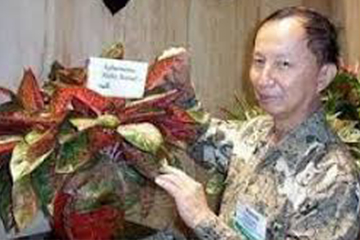 Alumni of Biology, Faculty of Mathematics and Natural Sciences
Father of Aglaonema Indonesia

The discoverer of Aglaonema “The Pride of Sumatera”, a new variety of aglaonema plant born in 1987 and an award winner in a competition in Netherland. Aside from that, Greg Hambali also found 31 varieties of aglaonema that has been registered to Center of Plant Variety Protection, Ministry of Agriculture of Indonesia. Even one of The Big Five auctioned for IDR 660 million. For his progress, he was awarded Anugerah Kekayaan Intelektual Luarbiasa (AKIL) in Plant Variety section. 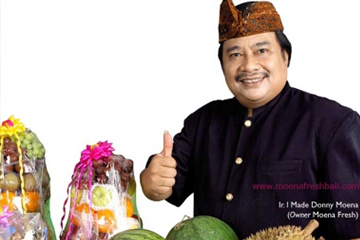 I Made Donny Waspada

I Made Donny Waspada

With the aim of cultivating fruits, Donny opened a fruit shop which was named UD Moena Fresh.  After success with the fruit shop, Donny formed PT Moena Putra Nusantara (MPN), which is a company supplier.  With the initial steps to buy a few kiosks at the Central Market in Jakarta and the Caringin Central Market Bandung.  His business entered the local fruit export market.

Now, Donny has a turnover of 4 billion per month from 12 outlets of "Moena Fresh" by employing 250 employees.  In addition to the fruit shop business, he also has a fruit supplier business with the business name PT MPN with a turnover of around Rp. 750 million per month and a total of 70 employees.  “My dream is not just here, I also target to add one store each year.  Hopefully my obsession to open outlets in Australia can be realized soon," said the man who has this simple appearance with a typical towel that surrounds his neck 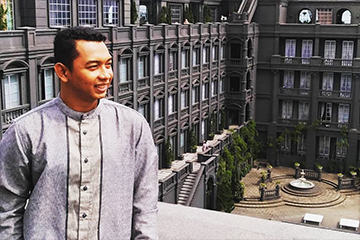 Aang Permana boosts the business of glass fish. With initial capital of hundreds of thousands of rupiah, this man now has a turnover of up to half a billion rupiah. This man born in 1990 glanced at glass fish because the potential of this fish is quite large and has not been optimized by the community. In fact, the surrounding community is reluctant to consume fish called in the Latin as Prambassis Ranga. Aang started the glass fish business in 2014. His initial capital was Rp. 500 thousand and he used it to buy glass fish and simple cooking utensils. Although he did not have a mature business plan, he immediately chose to experiment immediately. Apparently, the glass fish business named Crispy Ikan Sipetek received a pretty good response. Aang decided to quit his job at an oil company. Crispy Ikan Petek is sold for IDR 15 thousand per pack. Aang itself produces around 1,000-1,500 packs per day. His hard work is fruitful at last. Now, Aang can pocketed a turnover of IDR 400-500 million per month. This product has been sold abroad as well as Malaysia and Hong Kong. Aang also employs non-productive aged mothers to help produce Crispy Ikan Sipetek. This is so that they can help with family income. To ensure the availability of glass fish, which is the raw material for its products, Aang partnered with a number of fishermen who are on Lake Cilatah in Cianjur, West Java. In addition to developing the crispy fish business, the man who had studied in the United States for 3 months also developed a freshwater fish farming business. These cultivated fish are supplied to several restaurants in Cianjur and Bandung. Aang Permana has now enjoyed his success.